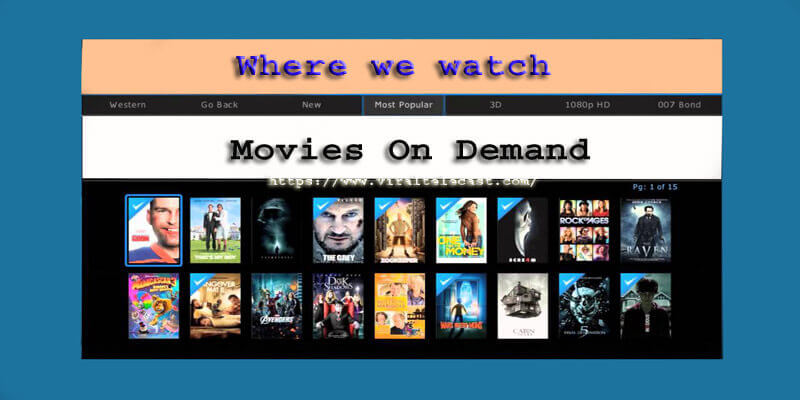 I am going to share information with you all about which platform is best for watch movie on demand. Since, lots of people are confused and unaware of the platforms available in the market which provide services of movies on demand and offer the best services, I find the need to share my knowledge with you people and assist you.

Nowadays, one of the major issues that we all are facing is lacking time for ourselves. Lives are on the roller coaster these days. People miss their favorite shows and movies because of the unavailability of time. There is the need for time management so that one could find time for itself. That is the reason why the concept of the movie on demand emerges.

Now, people can watch movies or their favorite program according to their demand on their schedule, anywhere.

So, here is the information regarding some of the entertainment websites and mobile applications available online.

1- Turner Classic Movie – TCM stands for Turner Classic movie. TCM is one of the best entertainment platforms for the Classic films, series, and shows. TCM has a massive amount of classic cinema in their film library.

TCM provides the facility of movies on demand and schedules it according to the need of the viewers. This TCM schedule is classified into three formats such as TCM daily schedule, TCM weekly schedule, and TCM monthly schedule.

The Criterion collection provides movies on demand. It gives the additional downloading feature on demand at $5.00 only. And it sells the DVD in the range of $30.00 to $40.00 per disc.

3- USA Network – USA network is an American based cable service provider, and the most popular cable network in America.

It broadcasts series and theatrically-released feature films and as well as sports programs. It’s a very trusted cable network in the USA as there are 95 million households’ users of this network in the United States.

USA Network provides movies and TV series on demand at home and mobile. It has also launched a mobile app for Android and IOS users and also available on amazon fire TV.

It’s the biggest seller of virtual DVD through mail anywhere in the USA. Netflix is currently operating in more than 190 countries, including the  US and India. It costs $9 per month.

It streams thousands of channels, movies, series, and programs. It started off as a pay-per-view service provider but gained a lot of attention of the consumers and viewers, therefore it started subscription based service. It costs $8.25 per month or $99 yearly.

6- Hulu Plus – It was launched in 2007 as a joint venture of veteran media broadcasters NBC Universal, Fox Broadcasting, and Disney-ABC, three major media platforms. It was initially free for some time but once it gained a lot of attention from the viewers, then it started rolling out on the monthly subscription basis. It costs $7.99 per month.

In the collection of TV shows and series, it is far forward than Netflix and Amazon. But the only problem with Hulu plus is there are commercials in between.

7 – Vudu – It is an online movie and TV streaming service that is owned by WalMart.  Their main share of profit comes from the digital streaming and providing movies and TV series on this platform to their consumers. They offer $2 for two day in DVD rentals which is the standard price.

It’s a great collection of classic TV shows and movies. The best thing about Vudu is that you can share your rented movie with 5 people.

8 – Starz – It is an American premium cable network and lately has expanded itself in the online streaming industry with “Starz Play” app. It has a plethora of movies, TV shows and compelling documentaries for all age groups.

It is one of the few streaming services that works fine with Apple TV or Xbox One. The cost for the “Starz Play” app is just $7.99 where you get the whole catalog of Starz originals.

9 – YouTube TV – Youtube TV is Google’s version of live TV streaming service. It was launched just a year ago and is rapidly giving competition to services like Sling TV and DirecTV Now. Unlike Hulu with Live TV, which blends Live TV with online streaming, YouTube TV is a stand-alone product.

One of the Coolest features of Youtube TV is you can record unlimited DVR for 9 months. The downside Is you can’t skip commercial during the on-demand program. Youtube TV is still in its early stage and will only grow better.

10 – HB0 – The granddaddy of all who started the premium cable revolution. It is the most popular satellite TV (alongside Cinemax) with over 40 million viewership across the US alone.

Well, Cinemax is a bit cheap ($9.99 per month) than HBO ($14.99 per month) but it doesn’t have the critically-renowned television series, such as Game of Thrones, Silicon Valley, and True Detective.

HBO is definitely the place to stream if you want to be updated with the most popular show online.

Conclusively, Netflix and Amazon Prime are the two most recommendable platforms for movie watchers and sports lovers. However, when it comes to TV shows then Hulu Plus should be preferred.