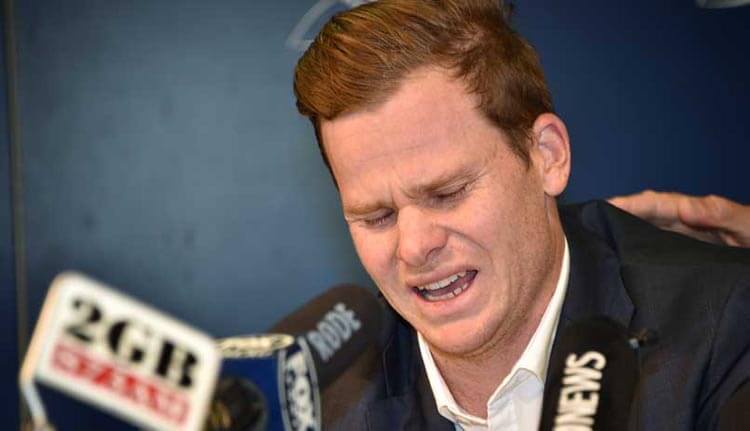 Ball-Tampering accused Steve Smith had received no sympathy from media. He was sentenced to ban from playing cricket for the nation for 1 years.

In the previous interviews, he admitted that he was involved in the ball-tampering and it was fully planned by the David Warner, Bancroft and by himself.

In the latest interview, while reporting to the media, his eyes got wet and he started crying. Just after that, media started trolling him. Britain media give him captions as “Captain Cry Baby”, “Crying Shame Face of Aussie Cheat”.

Feelings of Father also got hurt

When Steven Smith was confronting and reporting on the media, he was accompanied by his father, who was also found tapping his shoulders while Smith was delivering his apology speech to the media.

Smith’s eyes were full of tears and he got numb to speak out and deliver the speech. His father got up from his seat and patted his son’s shoulder, indirectly saying that he was there for him, no matter what. But media made so much fun of smith’s tear that even his father’s heart got pierced.

People do have sympathy for him

No matter what he has done but people and his teammates are supporting him not for his misconduct but for his guts to speak and stand for what he had done. He is not one of the cowards who do bad and remained silent in dark. If he had done wrong, he came out and spoke out in front of the world. He confronted everyone.

Michael Vaughan tweeted, “Good people make mistakes’  … I honestly think Steve Smith & Cam Bancroft are decent guys who had a moment of madness  …  they deserve a 2nd chance and hopefully get the right support them now  … Takes a lot of guts to do what they did today …”

Steven Smith’s tears also melted the heart of England’s former captain Kevin Pietersen. He tweeted, “Just seen Steven Smith’s press conference. As a parent, I’m gutted for him & his family! Shout me down if you want, but I’m speaking as a parent! It will get better mate!” He respected the guts of Smith to confront the situation, publicly.

What Steven did was against the rules, but what media did that was ethically and morally law. They captured the crying pictures of Smith and published.

They made all kind of fun that could be done. But nobody talked about his guts to spoke out and confront the situation.

Three people were accused but out of them only he dared to speak. Also, nobody talked about the parents suffering and their guts to stand with their son’s suffering. They just pasted all the spicy things.