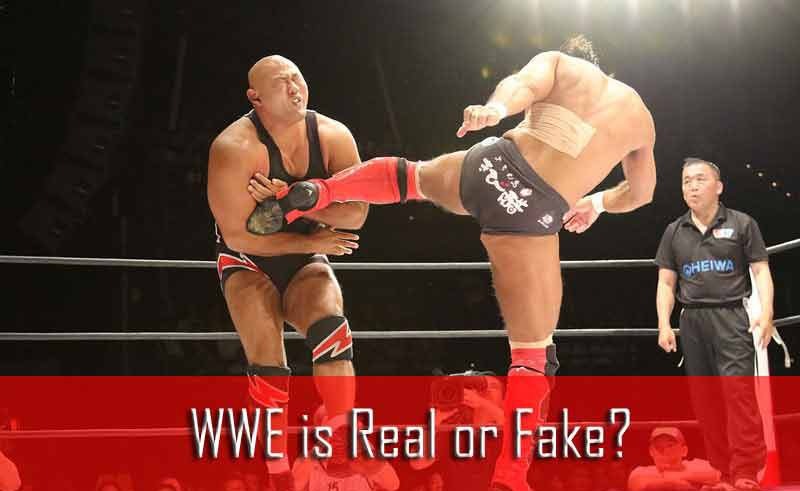 Hello, WWE Lovers. I am going to share some uncommon facts about WWE. Such Facts which disclose whether it’s real or it is just fake wrestling.

For the beginning, I don’t know whether it’s genuine or not, but I can definitely say that lots of people love WWE game and their wrestlers. After gaining so much popularity of wrestling, WWE also launched their games. But everybody wants to know about, Is WWE real or fake?

Let’s move to the facts of WWE wrestling. We know that there are millions of fan following of WWE. Being frankly, I’m also one of them, I am the greatest fan of Indian Wrestler, ‘The Great Khali’.

But I’m still confused about whatever I see in the WWE Ring. Is fighting true or scripted? When we watch WWE, sometimes we feel it’s real wrestling. Clearly, when opponents in the ring, shout at each other, they injured each other, when they cry, they scream and majorly, thought convert into believing when we see them bleeding.

The level of aggression among them, win our trust. And sometimes, its feel like what’s going on? What’s this drama? Opponents act weirdly in the ring. But one thing for sure I can say that WWE can be scripted, but It cannot be fake.

Why Can We Not Say WWE is Fake?

Wrestlers put all their efforts to concentrate the people’s mind over wrestling and cheering on their performance. One side we see the Undertaker fighting with John Cena. The bleeding started from the head of both wrestlers. Undertaker was roaring over John Cena, and he was searching something heavy to beat John Cena.

Immediately, he found an iron chair, and he picked it and threw on John Cena. John Cena saved his head and at last, stopped chair by grabbing it. Again, John Cena kicked in the nuts of the undertaker, the undertaker fell down, and John Cena continued to beat him. But finally, Undertaker stood up and started fighting back with John Cena.

Much of portion of the fight that we saw during wrestling we found ourselves cheering on the fight, and we kept on thinking about wrestling. We kind of started believing at that time WWE is real. It’s a real wrestling.

Why Can We Say WWE is fake?

When any wrestler attacks over another wrestler with an iron chair and kicks to the head, then what it seems that wrestler will not be able to stand again for fighting? Because in reality, it hurts too much if we put ourselves as an example.

Bro! They are a human; they are not Thor or Ironman. They have only one agenda that he makes money from viewers through fake wrestling.

Several Superstars commented over the fakeness of WWE.

Booker T: “Every fan that comes to a wrestling match, the majority know what it’s about. You know if you go to watch a movie, sometimes you find yourself clapping or cheering the characters on, even if you know it’s not real and they can’t hear you. If you go to a sports match, it could be a really dull game. But with WWE you know every match is going to be the highest form of entertainment.”

Chris Jericho: “If Shakespeare was alive today, he would be writing Wrestling shows.”

I won’t spread the negative vibes about WWE reality. But I would say that WWE is entertaining for all of us through wrestling. Millions of people love to watch WWE and their wrestlers. It can be wrestling which is scripted, but fighting is real.

Maybe winning or losing can be decided before the start of WWE wrestling. Who, will kick to the ground? Who will be injured while wrestling? How many times will the wrestler fall on the stage?

All things which can happen in the WWE stage can be predetermined. It can be scripted. But punches and kicks are real. So, enjoy and watch your favourite wrestler on WWE shows.